Staking on KickEX: all you need to know 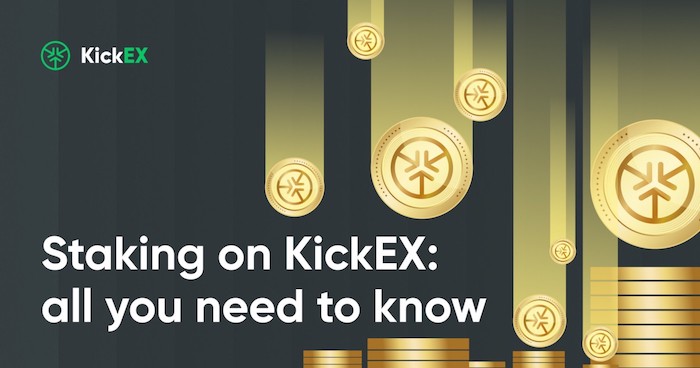 After the KICK token swap and replacing the old smart contract with the new one, we launched the staking feature for KICK holders which, since July 1, 2021, has already gone into effect. From that today, the accrual for staking becomes daily! Rewards statistics are available in your KickEX account.

What is staking: putting it simply

Staking is a way of earning a passive income by holding cryptocurrency. It involves storing coins on an exchange or in a wallet, or using a special staking service, and receiving rewards depending on the number of tokens stored. For example, holding 1,000 tokens in a staking account will typically net you between 2% and 20% for the year. This is called APY — Annual Percentage Yield. You can usually choose a token or coin and a lock time, a period during which you can’t retrieve your tokens. The longer the lock time, the higher the APY.

Cryptocurrency staking is, in a way, similar to bank deposits.

Depending on the terms of the staking, it can either be fixed or flexible. With fixed staking, as described in the example above, the funds of a user are locked to their wallet and there is no way to withdraw them. With flexible terms, tokens are stored on the exchange or service, and you can use them for trading, as an example, and rewards are accrued on the tokens that are stored in the wallet, held up in orders, and on those that you trade with.

KickEX provides flexible staking for KICK token so that you have unrestricted access to your tokens and can trade them freely.

Staking on KickEX vs. staking in a wallet

All cold cryptocurrency wallets already contain a staking feature for KICK token, and you don’t need to do anything to get new tokens. These include MyEtherWallet, MetaMask, and many others. However, unlike KickEX cryptocurrency exchange, cold wallet staking is almost always fixed. In other words, you don’t have the ability to use tokens that are in your wallet. They can only be sent to other addresses or exchanged on decentralized exchanges, where you’ll have to pay any and all fees that might be incurred for each transaction. At the current price, such an exchange would run between $6 and $10 on the Ethereum blockchain, which isn’t suitable for those engaging in arbitrage between exchanges or trading small amounts. Thus, storing KICK tokens in cold wallets makes sense if you’re not going to trade them and are just holding them with plans to increase the number of your tokens through staking. Staking on cold wallets is not visible in the blockchain as a transaction, but every KICK token transaction made by other users will increase your balance. You can make a note of how many tokens you have now and compare it to the amount in your wallet the next day, and you will see that your balance has increased.

On KickEX, tokens can be used for trading, and staking applies to those tokens that you keep on the exchange or that you trade, i.e. those that are in your orders. Unlike cold wallets, staking on KickEX exchange is done once a day, and you’ll see the number of tokens credited to you in your transaction history. To protect against abuse, staking is accrued on the minimum daily balance. If your balance today was 10,000 KICK tokens and you transfer 1,000,000 KICK tokens to your account, you will be credited any new tokens for that day out of the initial 10,000. After that, for the next 24 hours, you will be credited based on those 1,010,000 tokens.

Advantages and disadvantages of staking on KickEX

Advantages and disadvantages with staking in wallets:

Coins available for staking on KickEX

KickEX exchange currently supports KICK, KISHU and SAFEMOON staking.
To receive Staking Rewards you must have on your balance and in reserve during distribution at least:

Was the article helpful?

Thanks for the feedback!

Advise how to improve the article

Thanks for the feedback!